This year we welcome as guests Macdara Yeates - a traditional folk singer and one of a crop of singers associated with the recent resurgence of young singing talent in Dublin. Allan Taylor - a singer with a passion for the traditions, culture and the Doric language of his native Aberdeenshire. Ellie Beaton a remarkable young singer and musician from Rothienorman who describes herself as ‘a wee folk singer from the north-east of scotland who enjoys ballads, doric and pints.’ We welcome back Jim & Lynette Eldon fom Yorkshire - Jim a singer and fiddler and his wife Lynette a clog dancer. Many of Jim’s songs and tunes are local to Hull and East Yorkshire. As a local guest we welcome Erika Cragg - originally from Selkirk and now living in Kirkcaldy - an enthusiast for traditional songs and a regular participant at FifeSing.

Click on image or high definition link for image for publicity purposes. 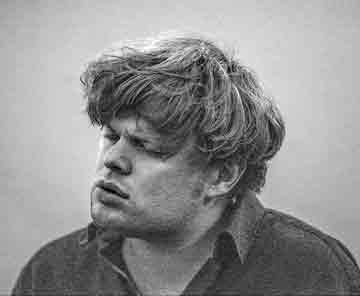 Macdara Yeates:
Macdara Yeates (‘Dara’ for short) is a traditional folk singer with repertoire spanning traditional ‘big’ songs, songs of old Dublin dock workers, and ballads from the Traveller tradition. Born and raised in Dublin, Macdara is one of a crop of singers associated with the recent resurgence of young singing talent in Dublin along with acts such as Lankum, Landless and Ye Vagabonds. He has toured and performed extensively throughout Europe, Asia, Africa and North America with acclaimed folk band Skipper’s Alley, as well as at singing festivals such as The South Roscommon Singers Festival, The Frank Harte Festival and the Inishowen International Folk Song and Ballad Seminar. His credits also include a variety of collaborative projects including: My Father’s Kind, a suite of poetry and music with writer Dermot Bolger, and Are You A Button Man? an ongoing collaboration with the Dublin Dock Workers Preservation Society, combining the stories of retired dockers with folk songs of the trade. At present he is Artist in Residence with the Dublin North East Inner City Fund working on a variety of community-engaged song projects. 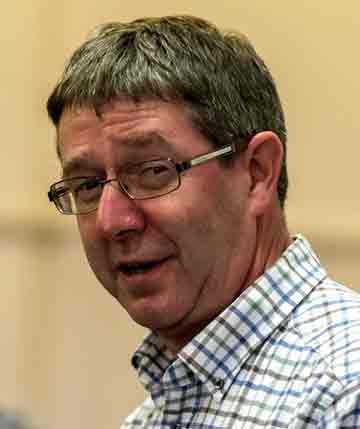 Allan Taylor:
Allan Taylor lives in Alford but comes from a household in the small community of Tornaveen where Scots music and song were always part of life. He was steeped in the song and cultural traditions of the North East farming life, hearing his first bothy ballads from 78s played on an old gramophone at his mother's family croft outside Methlick. He started singing traditional songs after entering the Buchan Heritage Society competitions in 2006 and quickly got involved with the Traditional Music and Song Association and is now Chair of the Aberdeen TMSA Branch. He has twice taken second prize at the annual Champion of Champions’ Bothy Ballad Competition held in Elgin each year. A Banker for 33 years, now a bookkeeper and golf club manager, follower of Aberdeen Football Club and Chair of The TMSA Aberdeen Branch. He has a passion for the traditions, culture and the Doric language of his native Aberdeenshire and most of his spare time is spent singing. 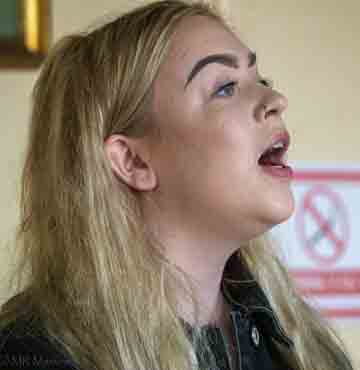 Ellie Beaton
Ellie is a young Aberdeenshire folk singer from Folla Rule, Rothienorman who describes herself as: "a wee folk singer from the north-east of Scotland who enjoys ballads, doric and pints." At the age of 16 she formed her band The Rowies and soon established herself as a talented musician and ballad singer. She won her first Traditional Singing title at Kirriemuir inn September 2018. Ellie took a guest spot with Malinky at Celtic Connections 2019 when she sang the bothy ballad Sleeptoon - with a fine review from Iona Fyfe: "Ellie commanded the audience’s attention from the outset with a strong voice and storytelling capacity - with a firm and authentic grasp of the North East dialect, leading the audience with the refrain and injecting humour into the song." Still not yet 18, she has been accepted as a student at the Royal Conservatoire of Scotland.
Website: https://en-gb.facebook.com/elliebeatonsong 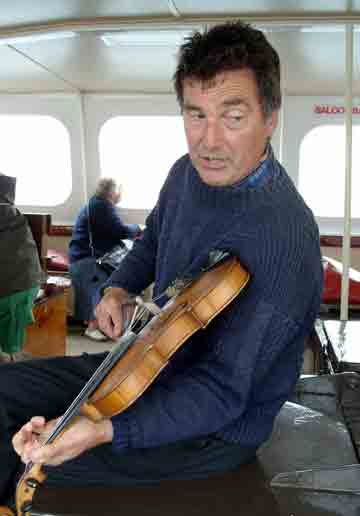 Jim & Lynette Eldon
Jim Eldon is a singer and fiddler and his wife Lynette, a clog dancer. Many of Jim’s songs and tunes are local to Hull and East Yorkshire – learnt from family, from neighbours and from actively going out and seeking old songs and tunes from people he met. Jim was a guest with us at FifeSing a few years ago when we were still running the event at the Fife Animal Park and we are very pleased to extend a Fife welcome once again. For thirty years or more, Jim played for a living on board the Bridlington pleasure boats Yorkshire Belle and Flamborian. As Jim says: "That was a seven-days-a-week commitment from April to October, playing without amplification out on deck up to seven trips a day. It was fun and it was tiring and it was a hand to mouth existence. The welcome arrival of an old age pension ended that job at the end of the 2012 season. The music continues!" Jim is a regular guest at Whitby Folk Week and last year gave a presentation on Flamborough fishermen’s songs and tales. He is also the regular fiddler with the The Goathland Plough Stots, a traditional longsword dance team with a history at least a couple of hundred years long.
Website: https://jimeldonfiddler.wordpress.com 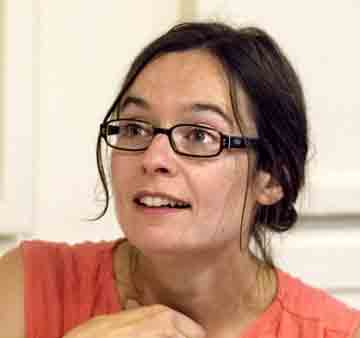 Erika Cragg
Erika is originally from Selkirk, in the Scottish Borders, now living in Kirkcaldy, Fife. Erika has always loved traditional music but her first encounter with traditional song came through a chance conversation with her art teacher, Elsa Lemaitre, while still at Selkirk High School. This fortuitous moment opened up the whole world of traditional song with Elsa introducing Erika to the singing of the Copper Family, Shirley Collins, Lizzie Higgins amongst many others and Elsa and Erika enjoy singing together in harmony. Another turning point came when Elsa took Erika to her first FifeSing in 2004. Here, Erika heard first hand the singing of Jock Duncan, Stanley Robertson, Sheila Stewart, Elizabeth Stewart, Gordon Easton, Duncan Williamson to mention just a few! As well as this, Erika met Jimmy Hutchison with whom she would work, learning from him his wealth of joinery skill and knowledge. This was soon followed by singing and then weaving, where together in 2017 they would establish Newburgh Handloom Weavers. Together Erika and Jimmy helped run the Muchty Traditional Music Festival from 2006 and then Falkland Traditional Music Festival from 2013. 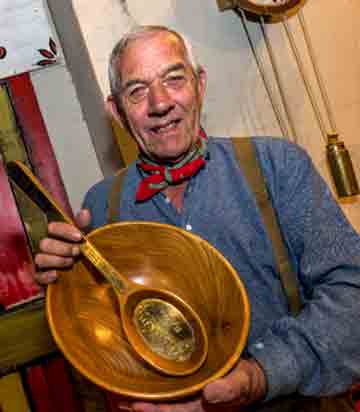 Joe Aitken
Joe Aitken, 75,  is one of the great upholders of Scotland’s bothy ballad tradition. Joe is lucky enough to have known and learned songs from many of the great traditional singers of the past - Charlie Murray of Craigeassie, Willie McKenzie of Inverness and Willie Clark of Ballindalloch to name a few. He has of course been a guest and regular participant at FifeSing and, this year, he has agreed to join us for the Jimmy Hutchison interview spot when we will hear about his life, his songs and the singers and bothy ballad characters he has known.  Winner of many singing competitions for his authentic narrative style, he has won for a record six times the much-coveted porridge bowl, spoon at the annual Elgin Bothy Ballad ‘Champion of Champions’ competition. Born into the bothy ballad tradition, he would sing at end of term school parties and any time the family had visitors. However, it wasn’t until the early 1980s that Joe began to take singing more seriously. In 1982, the Kinross Folk Festival moved to Kirriemuir and Joe was encouraged to enter the singing competition. For Joe, who worked on the land for most of his working life, the bothy ballads are a social and political history of farms and farming and Scots culture that he takes great pleasure in sharing.  Joe was honoured to appear in the opening concert at Celtic Connections in 2016, marking the 50th anniversary of the Traditional Music and Song Association of Scotland and was winner of the Scots Singer of the Year title at the MG Scots Trad Music Awards in 2010. 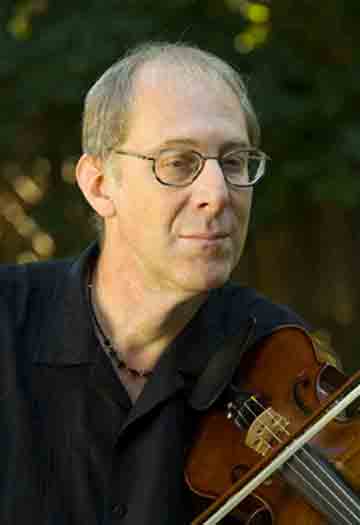 Michael Alpert
Michael Alpert has been a pioneering figure in the renaissance of East European Jewish klezmer music for over 30 years and is internationally known for his award-winning performances and recordings. In 2015, he was made US National Endowment for the Arts National Heritage Fellow. His particular enthusiasm is song from the Eastern European Jewish tradition. Michael at present spends much of the year in Fife - living in Crail - and he has joined us in song at FifeSing several times. We are very pleased that he has agreed to present a workshop at FifeSing2020. A former Research Associate at NYC’s YIVO Institute for Jewish Research, he has conducted extensive documentation of music and dance in Jewish communities throughout North America and Europe. He has featured in several documentary films has taught and lectured at universities in England, USA and Europe. From 1998-2008 he was Co-Artistic Director of Montreal’s KlezKanada Institute for the Yiddish/Jewish Cultural Arts. He currently serves as Director of Jewish Heritage and Arts Programming for the Jewish Culture Festival in Krakow, Poland, and is Senior Research Fellow at NYC’s Center for Traditional Music and Dance.
Website: http://michaelalpert.org/html/about.php 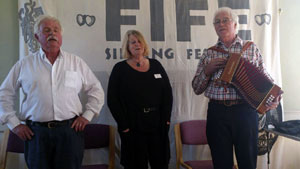 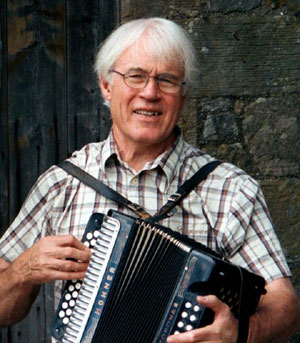 Pete Shepheard
Pete is a singer, musician and folksong collector. A founder member of the Traditional Music and Song Association of Scotland (TMSA) in the mid 1960s, his enthusiasm as a singer and collector resulted in the creation of Springthyme Records in the 1970s specialising in the release of recordings of Scottish traditional song and music. Pete has recorded two CDs as a member of Shepheard, Spiers & Watson. His contacts with the Scottish traveller traditions of the Stewarts of Blairgowrie and Jeannie Robertson's family in Aberdeen led to exploration of traveller tradition in Ireland and England as well as Scotland. He has presented lectures and workshops based on his song collecting, on ballad repertoire in the living tradition, traditional singing style, song repertoire among the Romany gypsies in Gloucestershire and among the Scottish travelling and farming communities in Fife, Tayside and Aberdeenshire. In December 2018 Pete was awarded the Hamish Henderson Services to Traditional Music Award 2018 at the MG Alba Scots Trad Muic Awards in Perth. Websites: Peter Shepheard and www.springthyme.co.uk
Shepheard, Spiers & Watson
CD1: They Smiled as We Cam In and CD2: Over The High Hills 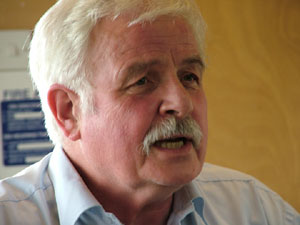 Jimmy Hutchison
Jimmy is originally from South Uist - his mother a Gaelic speaker, his father from Glasgow. Jimmy has been singing traditional songs for many years. In the 1960s he was involved in the St Andrews folk club and was also a founder member of the Blairgowrie Festival and the TMSA. He became a great admirer of Jeannie Robertson, the Stewarts of Blair, Norman Kennedy and old Davie Stewart. Jimmy now lives in Newburgh where he runs a joinery business. He has recorded a solo CD Corachree on the Living Tradition label. He has recently set up his original Kennedy loom in his joinery shed in Newburgh. It is well worth a look at the Newburgh Handloom Weavers website.
Website: Jimmy Hutchison 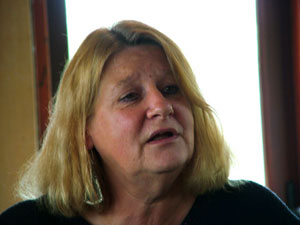 Chris Miles
Chris was born in Falkland and now lives in Kirkcaldy. She has been singing folk songs for many years and, as well as singing solo, she has performed with Gordeanna McCulloch, Aileen Carr and Maureen Jelks, all well known as solo singers and together as Palaver.
Website: Chris Miles